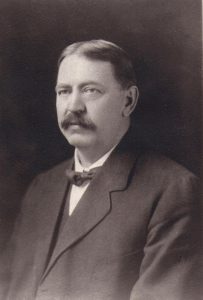 After the coming of the railroads and the influx of people (the Turneys being two) to the El Paso region in the late nineteenth century, a city remained to be built.

Henry Trost moved to El Paso in 1903, and with his brother, established Trost & Trost, an architecture firm. While many members of the Trost family contributed to the family business, most accounts name Henry the primary designer.

Although the Turneys originally lived in a white stucco cottage, they loved to entertain and needed a residence in which to do so. In 1907 or 1908 (accounts vary) W.W. Turney commissioned Henry Trost to design a home for the entire city block on Montana Ave. which he owned.

While Trost was known for his innovative designs, the Turneys wanted something traditional and conservative. The result is something part Antebellum, part Renaissance, part Greek, and even part White House. The home was said to cost the Turneys some $50,000. The main residence featured five upstairs bedrooms and one large sitting room, a grand parlour, ballroom, dining room and kitchen on the main level, and servant’s quarters in the basement. One of the home’s crowing glories is the Art Nouveau style stained glass window at the landing of the grand staircase. The home even included a separate carriage house with upstairs servant’s quarters.

Your ticket for the: Henry Trost