People record their histories in different ways. For many Western peoples, the pen and paper were the primary means of recording the past. Still, many civilizations and subcultures of civilizations were limited in their ability to read and write or their ability to obtain the tools necessary to write down their stories. Yet, history is always recorded. 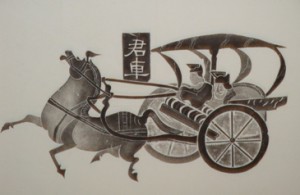 The Chinese began recording their histories as far back as 2000 BCE by making carvings on objects such as bone, bronze, wood, and the like. They found, however, that stone was the most durable material to preserve their inscriptions.

Unfortunately, stone inscriptions were not portable. People in remote villages could not benefit from religious and historical texts carved into temples and monuments. Historians believe that by the seventh century CE, the process of creating ink rubbings began. To make a rubbing of an important text or pictorial scene, a moist sheet of paper is placed over the stone inscription. When the paper is almost dry, an ink pad is tapped over the surface, creating an imprint of the image on the paper without the ink touching the stone. This process of rubbing became so popular that many of the original carvings have been worn down or destroyed. Luckily, Chinese artisans have re-carved the originals, either on the original rock face or on separate slabs. While trying to keep as true to the original as possible, these re-carvings are valued much more highly for their artistic than their historical value.

While the International Museum of Art has a collection of rubbings from all over China, perhaps the most interesting are rubbings of scenes originally carved on the Wu Family Shrines located in Shandong, China. These giants tombs were constructed at the height of Confucianism during the Han Dynasty (206 BCE–220 CE). Confucianism emphasized the reverence of ancestors (both dead and living), so giant tombs paying homage to the ancestors of the wealthy began to be constructed throughout China. These burial chambers, much like those of ancient Egypt, were loaded with art and treasures. The walls and ceilings of these shrines were carved with elaborate designs, showing scenes of the burial of the deceased, tributes to his life, or religious images.

Your ticket for the: Chinese Rubbings