The Museum has on display over fifty Buddha sculptures in a variety of media. The Buddha exhibit is designed not only to allow the patron to appreciate the high quality of these fine sculptures but to learn something about Buddhist culture and religion as well.

Siddhartha (meaning he who achieves his goal) Gotama was born in what is present-day Nepal somewhere in the 6th Century BCE. As a very wealthy prince, he never needed to leave the palace walls and was thus unaware of any suffering in the outside world. 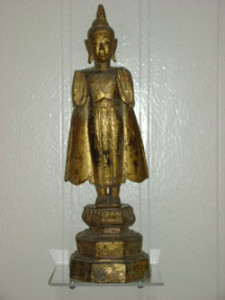 When he was about 29, he decided to ride out of the palace and was deeply disturbed by the sickness, death, and poverty that he found all around him. Siddhartha then decided to leave all of his worldly possessions behind and take up the life of a monk, giving up all earthly comforts and engaging in constant self-deprivation and abuse. Still, Siddhartha was not happy. Since he was not happy living a life of rich excess nor happy living a life of deprivation, he determined that the “middle ground”, rejecting the extremes of over-indulgence and self-neglect, was the best way to live. After a period of meditation under a tree, Siddhartha became truly enlightened and was thereafter given the name Buddha, meaning “enlightened one.” He spent many years teaching others the way to enlightenment until his death at the age of 80 (legend has it that he ate either a rotten piece of pork or a poisonous mushroom).

Originally, it was forbidden to make images of Buddha’s physical form, so the earliest Buddhist images did not feature Buddha himself. Instead, Buddha was represented by a symbol, many times a footprint, or an empty chair. Eventually, sometime in the 2nd Century CE, sculptors began making images of the Buddha in human form.

Some of these sculptures, however, are not Buddhas at all. As Buddhism began to spread outward from India into China, Japan, and points between and beyond, local gods and goddesses began to be included in the Buddhist pantheons.

This syncretism (a blending of religious beliefs) produced images known as bodhisattvas. Bodhisattvas are on the path to enlightenment but have chosen to stay in the earthly realm (ultimate enlightenment brings about nirvana, or transfer to another realm of existence) to assist humanity with its journey. Bodhisattvas tend to have some of the characteristics of humanity’s desire for temporal pleasures such as elaborate jewelry and adornment or evidence of over-indulgence in food and drink like the large-bellied sculptures based on the Chinese god Budai, the god of contentment and happiness. Bodhisattvas may also be guardians of the Buddha and his followers.

Buddha images must be made according to strict specifications, as some sects of Buddhism believe that the actual images are imbued with certain supernatural powers. The Buddha must always be sitting, standing, walking, or reclining. No other pose is acceptable. In addition, each Buddha sculpture has a mudra, or hand gesture, designed to refer to a special event in his life or denote a special characteristic.

Your ticket for the: Buddahs